The Navigation Computer: Uses of the Wind Face

In the previous chapter we showed how, given heading, TAS and a forecast wind, we could use the wind face of the Navigation Computer to calculate the resulting track and ground speed. In fact, there are several operations that can be carried out using the wind face. Three of the most common are tabulated below:

1. To find Track, Ground speed from Heading, TAS, W/V if held on a mandatory heading.

3. To find W/V from Heading, TAS, Track, Ground speed. The found wind will be more recent and more local than a forecast W/V.

Finding track, when given heading, as in the last chapter is the simplest operation, though not the one most generally used, and you may have thought that the reason we show it is because it is the simplest one to use to explain the Triangle of Velocities, but has no practical operation. This is not true; its practical use can occur as follows:

Suppose that you are on some pre-planned track, for instance, on airway R123 between Brookman’s Park and Clacton. You have used your Navigation Computer to calculate the desired heading to maintain the track (we have not covered how you do this yet, but that follows shortly) and you still have the forecast W/V marked up on your Navigation Computer. Then, because of a conflict of tracks with other traffic, ATC gives you a mandatory radar heading of 030°T, taking you temporarily off the airway at time 1003. You make a note of your VOR/DME position at the time.

After a while, the conflict is resolved and 1009 at ATC inform you that “You are cleared own Airway navigation to Clacton”. At just that moment, the VOR unlocks. You have no area navigation equipment. How are you going to find the required track to Clacton?

Answer: You use your Navigation Computer. You should have the forecast wind (let us say 315/15) marked up on the wind face from when you were flight planning before the flight. Put your TAS (say, 160 knots) under the centre circle, set the heading of 030° and read off the drift and ground speed, exactly as in the last lesson. This gives 5° starboard drift, making a track of 035°(T), and a ground speed of 157 knots.

From the position you noted at 1003, draw a track line of 035°(T) on your chart. You have gone 6 minutes (one-tenth of an hour) at 157 knots ground speed, so that is 15.7 nautical miles. That is your best estimate of position (known as a “dead reckoning” or “DR” position and shown by the following symbol: 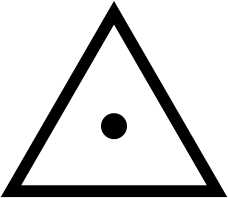 From the DR position draw a straight line to Clacton. That is your new desired track. 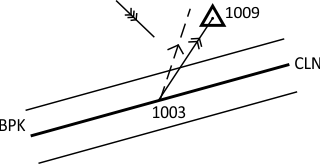 The purpose of this last example is to make the point that there are occasions where you need to be able to calculate track from a given heading, not the other (more common) way round.

Next: Solving for Heading and Ground Speed