The Navigation Computer: The Effect of Wind

Aircraft do not always travel in the direction in which they are pointed. If there is any crosswind, the track will be different from the heading. We will start by explaining this in terms of a boat crossing a river.

Imagine a river 10 NM wide. Imagine that it has a current of 5 knots. 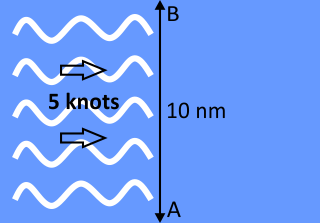 If you stand at Point A and throw a stick into the river, after one hour it will have been carried 5 NM downstream.

Now imagine that the river has been dammed, and has become a lake. There is now no current and the water is still. This time, you are at Point A with a boat with an outboard motor and a speed of 10 knots through the water. If you set off from Point A to cross directly to the opposite bank, one hour later you will be at Point B. 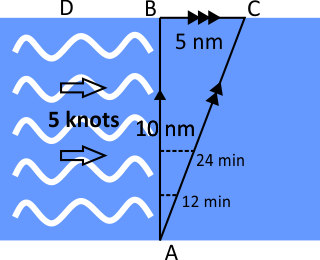 Now combine these two ideas. The dam is removed and the lake has become a river again. We have our 5 knots current back. We set off in our boat from Point A heading towards Point B. However, the effect of the current is to take us downstream, as before, and this time we finish up at Point C, 10 miles across the river and 5 miles downstream. Note that we pointed the boat (heading) towards B, but have actually travelled (track) to C. If we want to finish up at Point B, we need to aim off to the left towards Point D.

Exactly the same process takes place with aircraft travelling through the air. On a day when the air is completely calm (analogous to the lake), the aircraft tracks where it is pointed. We get completely calm days about 6 times a year. However, we still have to be able to navigate on the other 359, so we need to be able to take account of wind, or moving air (analogous to the river).

This term ‘wind’ tends to suggest something transient and many newcomers to aviation find it hard to imagine that something so unsubstantial could have such an effect on such a dense massive aircraft as, say, a Boeing 747, or a dense fast moving aircraft such as a Tornado. This is why this chapter uses this rather elaborate analogy of the river. It is easy to imagine a boat or a twig being carried downstream by a 10 mile expanse of river moving at 5 knots. However, wind is not simply little puffy transient eddies of air. Wind is the continuous movement of an air mass.

An air mass is a large homogenous body of air travelling over the ground - we normally do not regard it as an air mass unless it is at least, say, 60 NM by 60 NM in size. This whole air mass travels over the ground, just like the river. Your aircraft is supported by this broad mass of air in just the same way as the boat or the twig is supported by the river and it therefore travels in it just as the twig travels in the river.

Next: The Triangle of Velocities