The resolution of wind into head or tailwind and crosswind components is of importance both in en route flying (particularly as part of the Flight Planning syllabus) and in take-off and landing. There are various techniques of rapidly calculating crosswind components using mental arithmetic and rule of thumb methods, but these are not precise enough for Navigation exam questions, which have to be resolved by use of the Navigation Computer in order to ensure the required level of accuracy.

The wind rarely blows directly along the line of an en route track or along the centre line of a runway. There is almost always an angle between the track or the runway direction and the direction from which the wind is blowing. 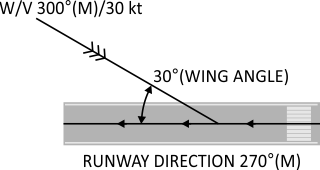 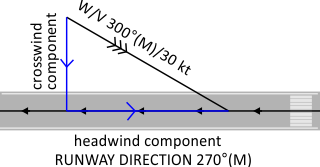 Pilots need to be able to calculate both headwind and crosswind components. Taking headwind first:

Threshold speed is CAS (or IAS, for all practical purposes). This corresponds to a TAS. However, stopping on a runway depends on the value of ½ mv2. The ‘v’ is ground speed. A headwind will reduce the ground speed on touchdown, requiring less brake energy to stop in a given runway length. For a heavy aircraft on a short runway, there may be a minimum headwind requirement, below which it will not be possible to stop with an adequate safety margin.

Crosswind can be even more critical. This is because:

With a crosswind, the pilot needs to line up on the approach using the extended centre line of the runway as a reference, then point the nose into wind to lay off for the drift on finals. At the moment that the undercarriage is about to touch down, it is necessary to apply rudder to re-align the aircraft with the runway. This is usually called “kicking off the drift”, although it should be a controlled application of rudder, not a “kick”, and applying the correct amount requires a certain amount of skill and judgement. The greater the crosswind, the more difficult this problem becomes.

Even if the pilot judges this perfectly and the aircraft is precisely lined up with the runway at the moment the tyres make contact, there will still be a sideways velocity. Tyres are mainly stressed to take fore-and-aft loads, not sideways ones, and it is possible to burst tyres on crosswind landings.

Finally, once the pilot has got the aircraft down, he may have trouble holding it on the runway, especially if the aircraft has a high tail fin. As the speed slows down, the rudder has less control authority and may not be able to counteract the crosswind component acting on the rest of the fin. The aircraft may run off the runway.

For these reasons, there will be a maximum crosswind component specified for the type of aircraft. Companies may also apply their own rules, quite apart from the aircraft limitation. For instance, an aircraft may be cleared to land in up to 25 knots crosswind, but a company might have rules that the first officer may only land with a crosswind of up to 15 knots. Above that, it has to be the captain’s landing.

Any FORECAST wind is given in true direction. Thus any written meteorological information (TAF, METAR, etc) will be in true. Forecast winds are used for planning navigation as well as landing and navigation tracks are normally initially measured in true.

Any information used to help the pilot line the aircraft up on the runway will be given in magnetic, because runway directions are always magnetic. Thus a wind from an ATC controller will be magnetic and the ATIS always quotes magnetic wind direction.

Next: Calculation of Wind Components