In general, you should avoid landing with a tailwind. If you are given a runway with a tailwind component, ask ATC if you can use the other end. It is usually poor airmanship to accept a tailwind and you will not have a leg to stand on afterwards if you run off the end – even if your brakes fail!

However, you may occasionally have questions that involve tailwind components, so you should know how to deal with them.

The first thing to notice is that you cannot directly plot the horizontal line representing a tailwind component in the normal way because it is above the horizontal scale line. You are in the curved part of the wind slide.

Let us take a worked example. 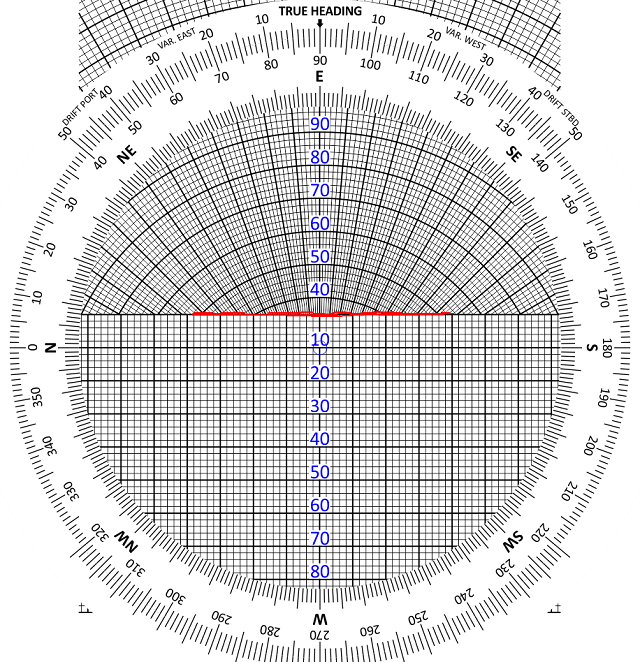 Your maximum tailwind component for this particular landing is 10 knots. What is the maximum wind speed from the given direction that you can accept?

ATIS is magnetic direction, so the value of variation is unnecessary information. Ignore it. (Watch out for this trap).

Now move the speed slide to bring 10 knots under the centre dot.

THEN DO NOT FORGET TO MOVE THE SPEED SLIDE BACK TO PUT ZERO UNDER THE CENTRE DOT!

Now rotate round to the wind direction.

Read off the value of the intersection. In this example, it is 16 knots.

If you find all that too complicated, do not forget that you can always treat it as a headwind problem on the reciprocal runway!

Allowable Wind Angle for a Given Wind Speed

Another problem sometimes arises which is quickly solved on the computer. It takes the form of determining between what directions a wind of given speed can blow without exceeding a stated crosswind component.

For example, it is required to find the directions between which a wind of 50 kt may blow without creating a crosswind component of more than 30 kt on a runway of direction 250°(M).

1. With the runway direction set against the true index, mark a cross on the centre vertical line to represent the wind speed of 50 kt.

2. Turn the plastic disc clockwise until the cross indicates a crosswind of 30 kt. Note the direction which now appears against the true index (214°(M)).

3. Now turn the plastic disc anticlockwise and repeat the procedure, reading off the direction which appears against the true index (286°(M)).